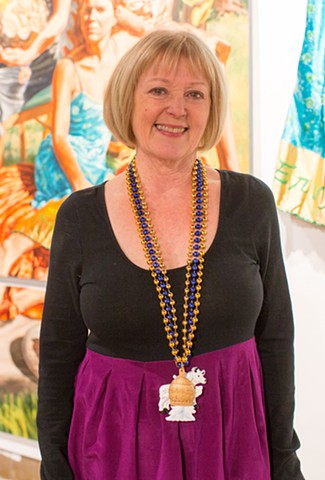 Recent work includes large scale oil on canvas figure paintings along with fabric/costume constructions that blend narrative elements from mythology and alchemy, the forerunner of modern science. The intent is to suggest multiple interpretations rather than a straightforward illustration of a specific narrative, a fitting choice in that alchemy by its very nature is about the process of transformation. The figures are portraits of specific individuals who are well known to me rather than idealized types. This has given the narratives an added "charge" and has served to ground the subject matter in the here and now. At first glance, it seems that a “real” space is being defined, but in fact, the painted images are constructed from multiple viewpoints and lighting systems. Passages of volumetric rendering set next to more abstract, painterly areas, result in the creation of a virtual, shifting world where nothing is quite what it seems.

The use of costuming and fabric in relation to painting is an idea that has evolved over a number of years. As costumes began to be more important in relationship to a painting's narrative, I realized how much the varying kinds of dress determined the “reading” of the character or persona of the figure. To intensify this theatricality, I began to embellish some of the costumes with embroidery or paint. Some are “found” costumes, but some have been designed and sewn from scratch.

As the series of fabric constructions developed, I began to think of the model’s costumes as separate elements to be seen next to or as an extension of the paintings. These constructions have become more and more elaborate and have included "The Hermetic Bride", an 8 panel painting grouped with a wall hung wedding dress and "A Peaceable Kingdom", 16 embroidered onesies coupled with a painting done in tribute to Edward Hicks’ famous painting of the same name. Another image, "Dio de los Muertos", combines painting, embroidered robes and miniature chairs displaying small silver emblems. In these works, I enjoy setting up an echo effect of an actual costume set next to one that is painted. Not only does this kind of echo bring about compositional unity, it creates a different kind of conversation. The “actual” becomes what is present and real while the painted version becomes a commemoration or the absence of the real.